We know this car has been all over the internet like a rash recently, but you don’t let something as cool as this go by. A lot has already been written about the original So-Cal Speed Shop Streamliner, and this fabulous new recreation by Dan Webb and his hugely talented team, so I’m not going to reinvent the wheel here – just concentrate on the important bits – like the Genuine Stromberg carbs! 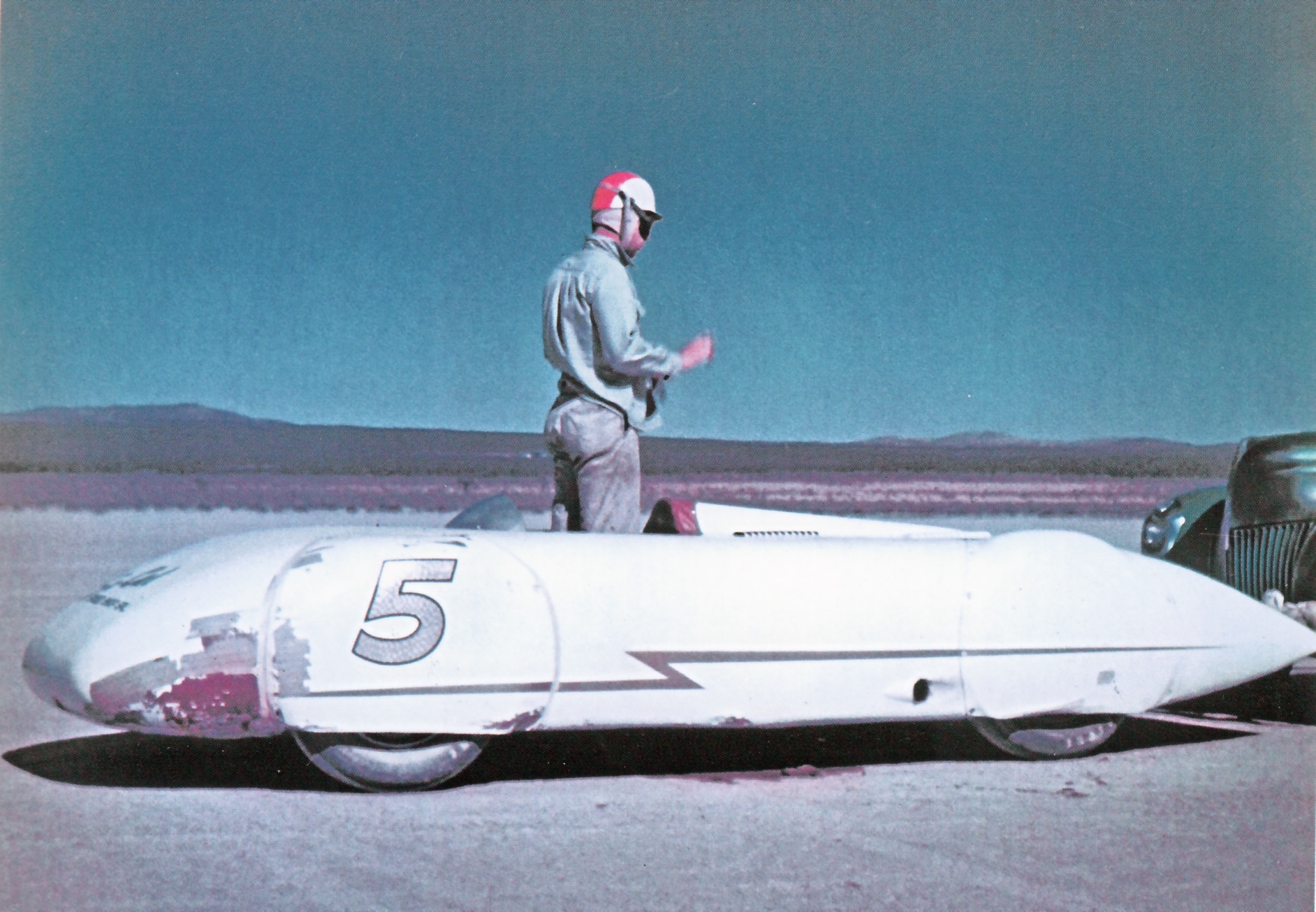 Let’s talk a little history first. Although it is best associated with So-Cal’s Alex Xydias, the original car was designed by Dean Batchelor with a body built by Neil Emory and Clayton Jensen at Valley Custom. It had a Model T Ford chassis, with a narrowed Model A front axle (to reduce wind resistance) from Dean’s previous Belly Tank racer. And get this. They ran this car at the FIRST EVER Bonneville Speed Trials in 1949. They took two engines. The tiny V8-60 (pictured) from Alex’s old Belly Tank set an A-class record at 159.39mph. With a Winfield A1 cam, Edelbrock heads and intake, it made a reputed 115 horsepower. In 1950 it ran 162.95 on just two Stromberg carbs.

The other engine (C class) was a ’48 Merc built by Edelbrock employee and flathead legend Bobby Meeks  – a 3 5/16th inch by 4 inch stroker with heads and intake by Edelbrock, a Kong ignition, Isky cam and three Stromberg 97s. See those tanks each side of the motor? That’s the water. There was no radiator. The hot new Merc ran 193.54 and 185.95 for a new Class C record of 189.745 mph, some 30 mph more than any hot rod had ever run before. In 1950, they hit an average over the two runs (they ran both ways back then) of 208.927mph. That’s why this car is so special. Right there. In two years, they raised the SCTA record for normally aspirated motors by 50mph. Now check the original plaque on the dash on this awesome replica…

In case you’re wondering, the original car did run without paint early on, and no wheel covers too (check the picture). Then it was painted Alex’s favoured white with gold lettering and numbers – gold leaf, no less. Check out the picture with all the blue sky. You can see the front end damage caused on the way to Bonneville that year. The trailer got away from Alex, jack-knifed and spun 180 degrees causing the front of the Streamliner to hit the rear of Dean’s ’39 Ford Convertible coupe. Look closely at the other pic of the guys repairing the V8-60 fibre timing wheel and you can even see the ’39’s bent rear fender. The cool picture of the Streamliner outside the So-Cal Speed Shop was taken for a feature article in Hot Rod magazine in 1950. Check out the Stewart Warner gauges counter display!

What to say about the new car that hasn’t already been said? Well, it has a fresh replica of the original Merc motor, built by Genuine Stromberg dealer H & H Flatheads in CA, (that’s Mike Herman with Alex X pictured) with three brand new, out of the box, Stromberg 97s on it. And it will be the centre-piece of a special party at the NHRA Museum during Grand National Roadster Show 2012 to honor Alex Xydias’ 90th birthday.

And by the way, I recommend everyone should read Mark Christensen’s brilliant book, “So-Cal Speed Shop..The Fast Tale of the California racers who Made Hot Rod History”…and get yourself to the Jalopy Journal for a great piece by Ryan who has written just the kind of things about the car that I would if I had more time and talent …www.jalopyjournal.com

2 thoughts on “The So-Cal Streamliner”