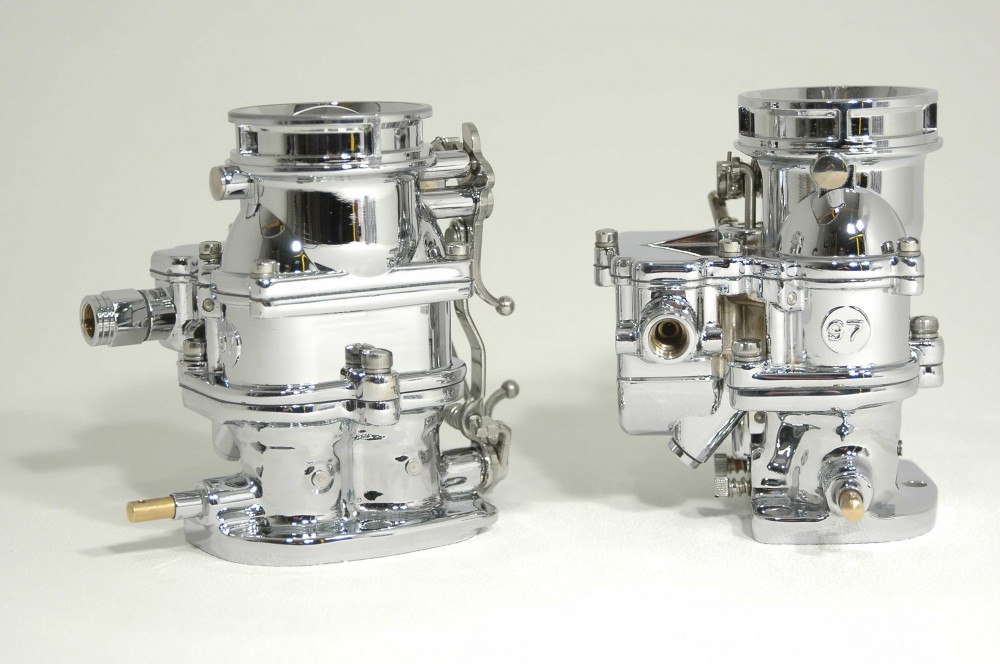 Now we’re talking…Check these babies out. Full freakin’ insane chrome 97s, including the base castings? Yes way…Destined for George Papadopoulos’ new V-twin chopper, they’re the result of some incredible chroming and polishing work. We can’t wait to see the finished bike.

When we launched our 9510A-CHR chrome Stromberg 97 carburetor, we never really considered chroming the bases. For one, we liked the black lacquer contrast. And for two, they’re an absolute SOB to chrome so there’s a danger of losing the shape completely and the cost makes it unrealistic for most mere mortals.

Bike builders are made of sterner stuff, though. And both these for George and others for Kon Zakzanis (for his two Billy Lane hubless bikes) have been fixed up through ace fabricator Steve Schuller (Helmetfreak@aol.com) who not only makes the clever intake manifolds, but has worked out the tricks you need to get them working great on a V-twin.

These bases were chromed by Heavy Metal Services out of Barrie, Ontario, Canada (call 705-220-3124). We shipped them out separately for chroming then they were fedexed back to us to build the whole carb. All I can say is….respect is due to Darryl, they’re damn flawless. And you can’t say that about chrome very often. We’ll spare you the Stromberg chrome 97 advert. Just click the link for more info.