So there I was the other evening, looking around on Google for 1946-48 Fords with early Cadillac engines (for a future Stromberg project) and I came across this awesome article from a small book from June 1956. And waddya know, right there is the picture we have used on the Tech Center page of the Stromberg website. The use of this old Bob D’Olivio photo was kindly donated to us, and to be honest we didn’t know what the picture was or where it came from. I could never work out what the car was – the hood shape just didn’t look right to me, especially with those whacky racing stripes. And I was even a bit concerned that it looked a little retouched – where the intake is balanced on the hood of the car. But now it all makes sense! 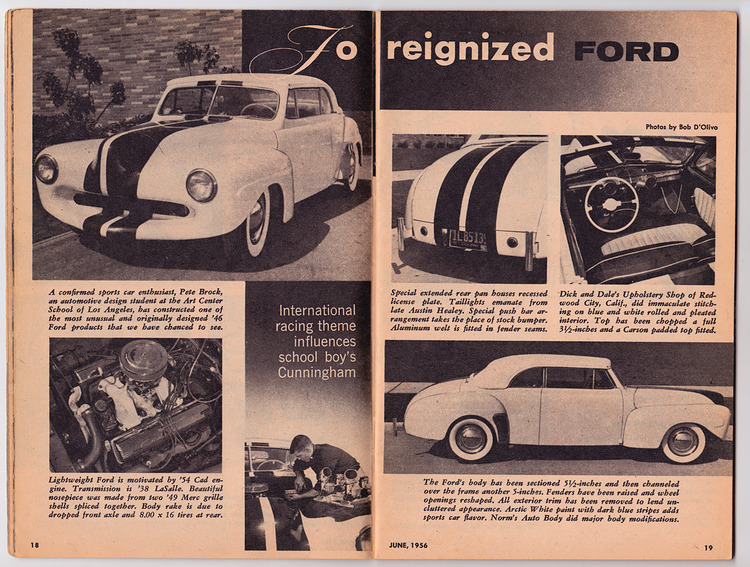 Pete Brock’s ’46 Ford is sectioned 5 1/2 inches and channelled another five inches with the fenders raised in the body. That nosepiece was made from two ’49 Mercury grille shells spliced together. And that Arctic White body with dark blue racing stripes reflected Pete’s interest in sports car racing – Cunningham race car colours.  The 1954 Cad engine was backed by a 1938 Lasalle trans – the first year for column shift.

Next coincidence? This very week, we were testing out a new range of 4×2 linkages (more news soon) and we have that very same Cragar Cad 4×2 intake here in the shop. This is the intake that started life made by Horne and originally came with a super-cool cast H-shape linkage bar. I wonder if this was just stunted up for the pics or if it ever made its way onto the motor?

So often in early hot rodding, the deeper you look, the more you find that the guys making the news with cool cars in their younger years pop up later on, achieving great things in other areas of automotive endeavour. Brock’s bio reads about as good as it gets. To quote the Brock Racing Enterprises website: “To historic Corvette fans he’s the guy who penned the lines of the original Sting Ray racer and by extension the ’63 Corvette “split window”. To Cobra fans meanwhile, Peter’s the guy who took the brick-like Shelby Cobra roadster and turned it into the slippery Cobra Daytona Coupe – the first American car to grab the FIA’s GT World Championship.  Datsun devotees love to remember the Peter Brock of Brock Racing Enterprises during the late ‘60s and early ‘70s; that fun-loving hipster who coolly called the shots as BRE’s 510 coupes decimated the Alfas and Porsches of the Trans-Am 2.5 series.”

What a cool guy. We’re proud to have his picture heading up our Tech Center. You can read more about his 1946 Custom on the awesome Kustomrama website. Just click the link.

One more thing. It took me two weeks to work out the headline on the ’56 article. Was it a T? An F? And what’s a ‘reignized’ Ford? ….think I need to get out more…