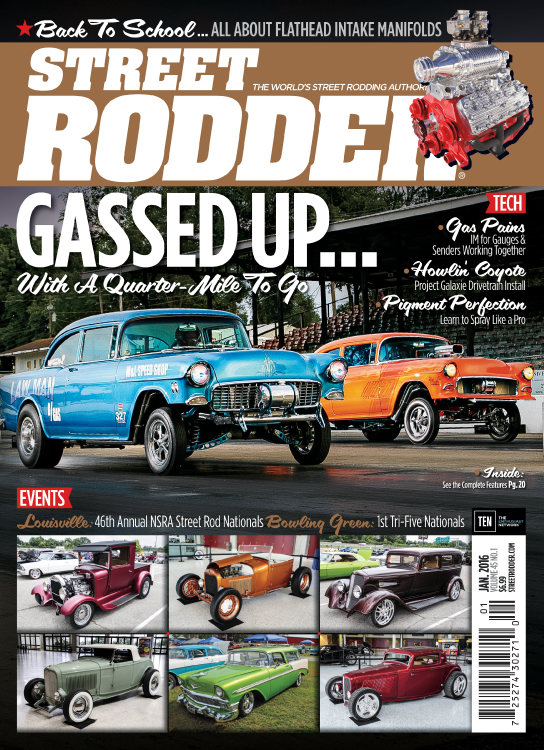 Stromberg 97 carburetors ( regular and BIG97 ) have gained some superb coverage in a major feature in January 2016 Street Rodder. It’s all about flathead Ford intake manifolds. Navarro, Edelbrock, Sharp, Offenhauser and more (all of which can work with the BIG97, of course). Written by Ron Ceridono with help from Kev Elliott and Mike Herman from H&H Flatheads, it’s also available online. You might find the online version a little easier to read. Click here to check it out! Here’s a couple of excerpts:

“Thanks to Mike Herman we were able to gather photos of the most popular intake options H&H currently offers for early (1932 to 1948) and late (1949 to 1953) Flatheads. While the manifolds look similar there are significant differences. The positions of the carburetors on two-two manifolds vary and as a result some require moving the generator, others don’t (manifolds that accommodate the generator are often called regular dual, while those with the carbs further apart are usually referred as super dual). By spreading the carburetors further apart they have a straighter shot into the ports and fuel distribution is improved but relocating the generator requires a head-mounted bracket. Some manifolds are equipped with exhaust heat, others aren’t. In cool locales with today’s fuel exhaust heat can help driveability, in hot climates it’s not normally necessary. All the manifolds shown here accept the stock-style fuel pump stand and the oil filler/road draft tube for 1949 to 1953 applications. Another difference is the number of bolts used to secure the manifold. Due to the shape of the runners, in some cases, the number of bolts has been reduced. On the other hand, in some cases, there are more holes in the manifold in the block, but in either case it’s not a problem.

Although all the manifolds shown are good, some manifolds may perform better than others with a given engine combination. The best bet to resolve that issue is to deal with an expert on the subject like Mike Herman.

Stromberg now offers a larger version of the 97. Completely reworked internally, they flow 250 cfm, compared to the original’s 165 cfm.”