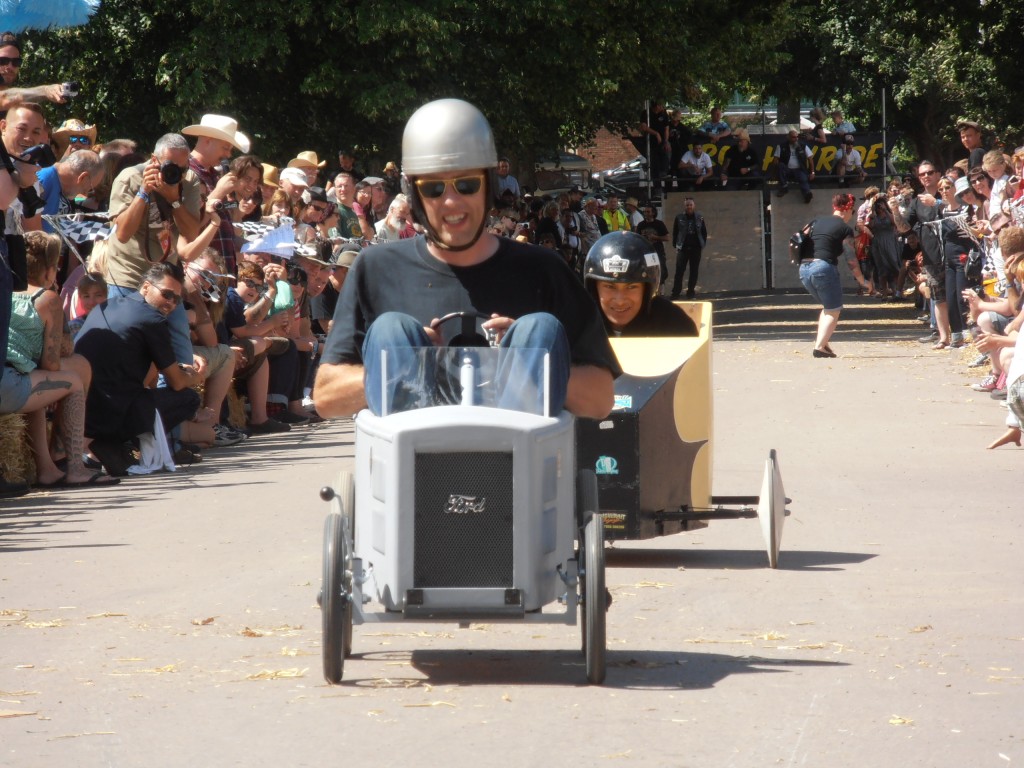 The 9th Hot Rod Hayride, held just south of London at the end of July, has become a real must-do event if you’re into traditional hot rods, cool bikes, 40s-50s music/clothing/stuff, or any one of the above, really. For us, it’s just about meeting our buddies, hanging out, checking everything out and taking some well-earned R & R soaking up the unique laid-back vibe. With the live music, the Hayride Hill Climb, Wall of Death riders, Art Show, Burlesque, Flea Market & Autojumble, the Stromberg Soapbox Derby and, new for this year, Roller Derby (!), there’s plenty to keep you out of the bar. And it’s a formula that seems to work year in, year out. The location is cool. Even the fact that ticket numbers are limited – this year was a sell out – with no day passes, adds to the atmosphere. It’s participation only and folks now come in from all over Europe.

Does it sound like we had a great time? You bet. Thanks to Jerry, Anna, Andy, the Detonators CC and everyone else who makes it such a great weekend. Congrats to the fastest Soap Boxer who won a pair of new 97s. Enjoy the pictures!

Remember our awesome 4th July red, white and blue Stromberg 97 carbs? Sold to Eric Arnette from Texas via our Facebook auction, we raised $900 for the Fisher House Foundation and paid the donation today. Here’s the letter of thanks from David A Coker, President of the Foundation.

Fisher House Foundation has built a network of comfort homes at major military and VA medical centers, enabling family members to be close to a loved one during hospitalization for a combat injury, illness or disease. They’ve helped over 19,000 military families, saving them over $200,000,000 since 1990. No wonder they have an A+ rating from the American Institute of Philanthropy. Maybe make a donation yourself? www.fisherhouse.org 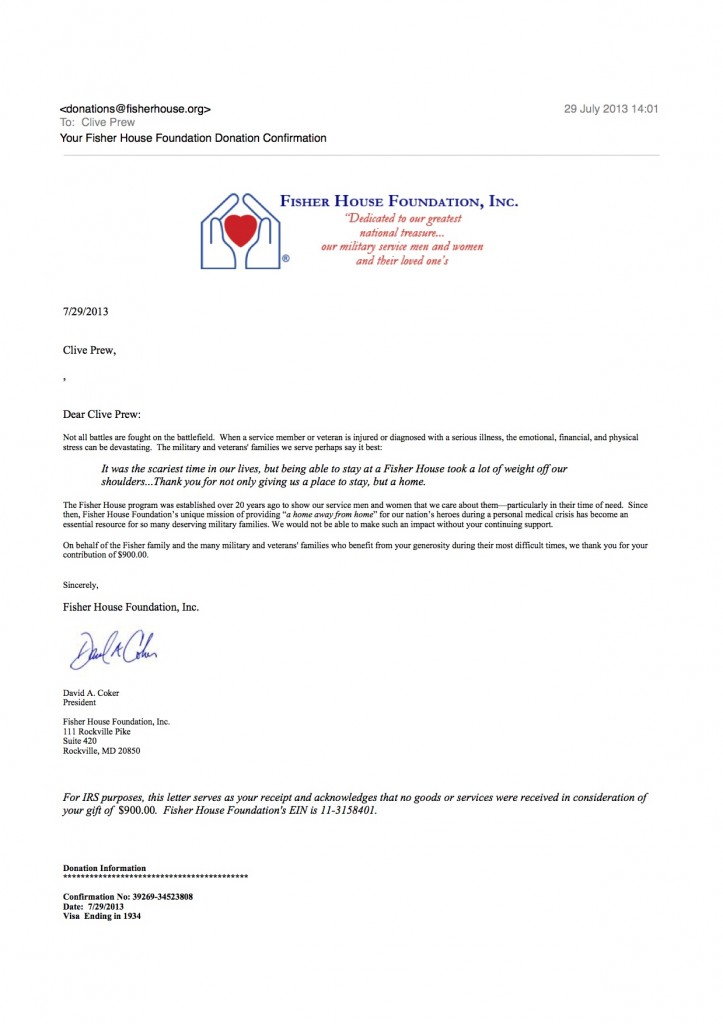 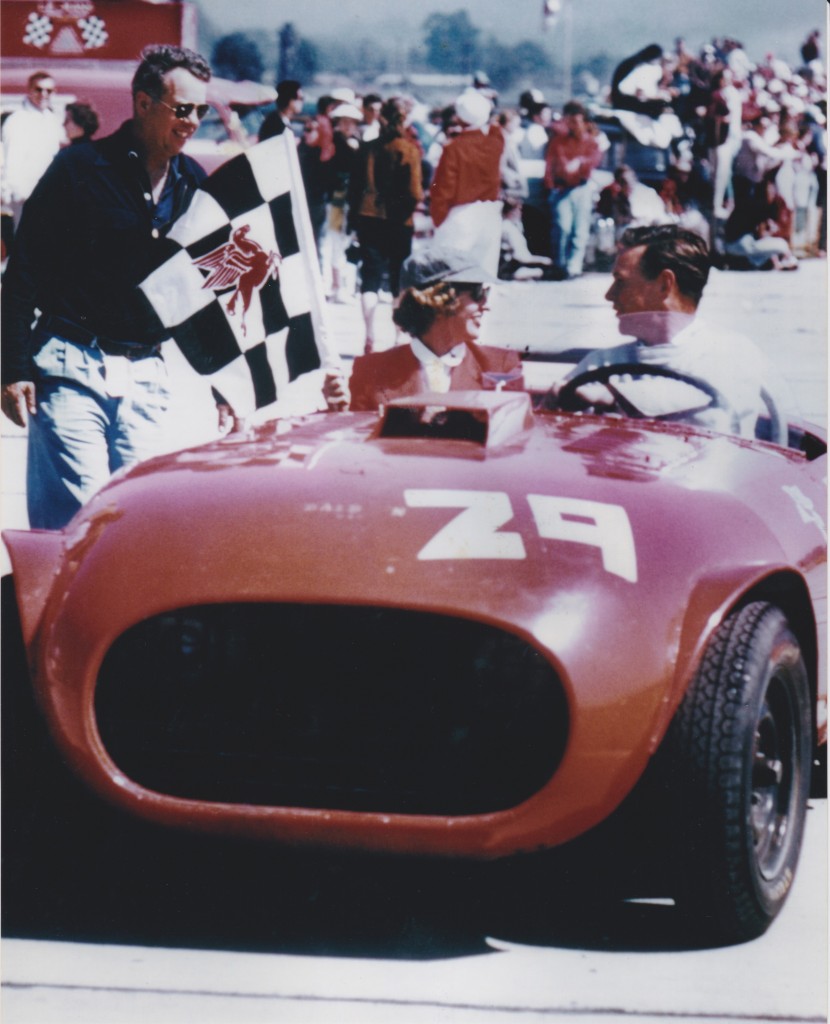 Ok, from one to ten, how cool is this picture? The red ‘sports rod’, the chequered flag, the white racing overalls, the haircuts, the big steering wheel, the female interest. Man, it’s got it all. Looks more like a shot from a 1950’s thrills and spills auto movie. But it’s real – entitled, ‘Dad’s win in 1956’.

Huge thanks to Stu Hanssen, of Santa Ynes, Calif for these great pictures of his Baldwin Special, once owned and raced by his Dad, William M Hanssen. Stu managed to locate the car – for sale – in Connecticut via an internet appeal in old race car circles.

Its original builder Willis Baldwin of Santa Barbara, Calif, built four Specials and William’s was the last, built on a ’48 Merc frame with transverse leaf front spring, coils on the ’52 rear end and the big Stromberg equipped Merc flathead with monster Ardun conversion. Raced by William, it participated in at least four races during the 1956 season, entered as a Baldwin Special. It also saw action in the March 12th, 1955 Preliminary Palm Springs Race, where Hanssen shared the track with Carroll Shelby, Ernie McAfee, Ak Miller, and Chuck Daigh. Naturally, Stu is keen to get the car on the track himself, and we certainly can’t wait to see it back where it belongs. There are a lot of great facts about the other Baldwin specials on Tam’s Old Race Car Site and more pics of this cool car on the Connecticut Classix website. 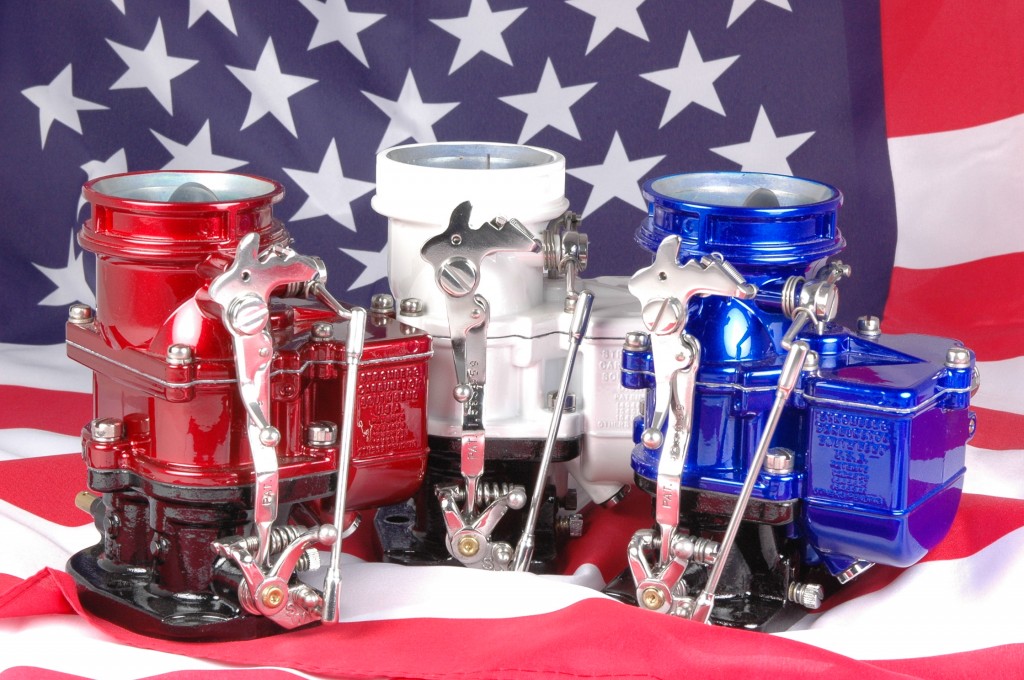 It was Rick’s idea. Paint some new 97 carburetors in red, white and blue – with all polished/chrome parts – to celebrate 4th July with our American friends. We’ve done Black and Chevy Orange before, but when these babies turned up from our buddies at The Paintbox in three House of Color Pearl shades, we just about exploded with excitement. Out came the flag and, well, here’s the result.

Our next idea is a little more serious. How about we auction these carbs through our Facebook Page and give all the money to a US Veteran’s Charity? Sounds good? Simply click onto our Facebook Page  www.facebook.com/stromberg97 on 4th July and add a comment to make a bid. Auction starts now. Ends midnight 11th July. They start at $100 – inc shipping. And there is no reserve. Winner takes all. Dig deep guys. It’s a worthy cause.

All the money will go to Fisher House Foundation, for their network of comfort homes built at major military and VA medical centers.  Fisher Houses enable family members to be close to a loved one during hospitalization for a combat injury, illness or disease. They’ve helped over 19,000 military families, saving them over $200,000,000 since 1990. No wonder they have an A+ rating from the American Institute of Philanthropy. Click here to read more – and maybe make a donation yourself. www.fisherhouse.org

One more thing. We’ve never hidden the fact that we’re not ‘born in the USA’ here at Stromberg (though Rick’s a US citizen). We’re not exactly related to old King George either. So we make no excuse for celebrating Fourth of July with all our American friends. You guys have played a huge part in helping Stromberg Carburetor get where we are today and we appreciate it big time. Have a great day!